It seems that many of us are encountering problems with our side stand switches. Often, we may have to put up with running the risk of either grounding out on the side stand (having jumped the side stand switch at the connector behind the left side panel) or riding around with the neutral light on permanently (after bypassing the neutral switch instead). It's not always clear where the fault may lie until the circuit is tested, though the chances are the side stand switch itself will be the culprit. The Haynes manual says that if the switch is found to be faulty it should be replaced. I don't know how much a new one costs but fixing it is really pretty simple. 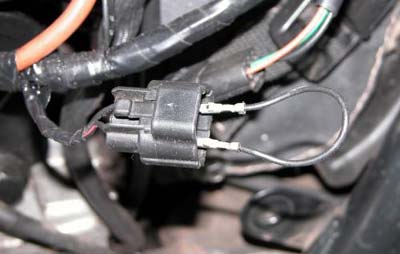 Ideally, the bonnie should be on its centre stand and with the side stand fully retracted (to take any pressure of the switch plunger), though it is possible to remove and test the switch with it on its side stand. Disconnect the connector behind the left side panel and thread it down from behind the engine. Then remove the switch from the underside of the bike with a T30 torx bit held by a small pair of mole grips or a pair of pliers (you could get away with using a 4mm allan key at a push - but be careful not to strip the screw). It's a bit of a pain getting in at the two screws, as they engage downwards leaving little room for working between the switch and the underside of the engine. Once the switch is free, remove the whole assembly for cleaning.

With all the dirt off the switch block, remove the rubber outer seal from around the plunger and clean the inner seal. That done, use a narrow needle to lift the inner seal away from the plunger and squirt WD40 (or similar, such as Plus Gas) into the gap. Do this a few times around the seal and then pump the plunger in and out a couple of dozen times. After it has started freeing up a bit, repeat the last step. 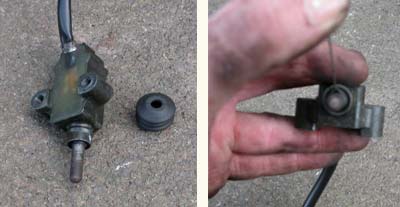 L: Cleaned switch with outer seal removed.
R: Peeling back the inner seal to spray WD40 into the gap.

When you've worked the WD40 down into the switch mechanism, test it with an impedance meter attached to the connector. With the plunger out, the circuit should be complete (impedance - zero). With the plunger in, the circuit should be interrupted (impedance - total). If it still isn't working, try adding some more WD40 and pump the switch plunger vigorously several dozen times and test again.

If you don't have a meter you can test it by fitting the connector block back into place and starting the bike (still on its centre stand), engaging first gear and then pressed the plunger in. If the switch is working, the engine will start and run in first gear then cut out as you press the plunger.

Having established that the switch is working, smear a little rubber compatible grease [*see note below] over the inner seal and replace the rubber outer seal then fit the switch and the connector block back into place. When doing so, you might need to put the screws through a thin washer to allow them to tighten the switch block more securely into place (on mine, it seemed slightly loose when I undid the screws initially). There is also a little bit of play in how the switch sits, so position it such that the tip of the plunger angles as far towards the front of the bike as possible to prevent the lug on the side stand pushing it sideways rather than inward as it should (surprisingly, this does actually make a difference to how smoothly the side stand moves out). Finally, test it by starting the bike (on its centre stand with the side stand still retracted), engaging first gear and then moving the side stand out.

And that's all there is to it. For the sake of a little pottering about, you can save yourself the cost of a new switch and learn a little bit more about the bonnie. All the same, it might be prudent to keep the piece of wire you used to jump the connections (if you did) handy in your tool roll, on the off-chance it goes wrong again.

With normal grease, rubber can absorb some of the chemicals from it which causes the rubber to swell and become brittle over time, leading to a breakdown of the seal. Rubber compatible grease is specially formulated to provide protection against corrosion and lubrication around the rubber seals found on pneumatic and hydraulic components such as pressurised air hose couplings and lift ram and suspension or fork seals. It is inadvisable to use any other type of grease for such applications.