Having installed the Wiseco 904cc big bore kit, I needed to open up the air flow in the air-box a bit while I waited for the necessary KARK parts to arrive. I did this by removing the air-box restrictor plate (plus snorkel) and I found it be a worthwhile exercise.

There has been a fairly intense debate over the last few years as to the wisdom of such a modification and the possibility that this might actually have a deleterious effect on the air-flow dynamics of the stock air-box design. It has been argued that, whilst air-flow might be increased purely in terms of volume, the amount of torque delivered by an otherwise unaltered 790cc or 865cc engine could be reduced as a result. With a 904cc engine, I feel that this debate becomes somewhat academic - it needs to breathe.

As with any alteration to the air/gas-flow through the engine, you'll need to make suitable adjustments to the jetting of the carbs. Just for interest, here's how the restrictor gap compares with that in the snorkel mounting plate [below]. 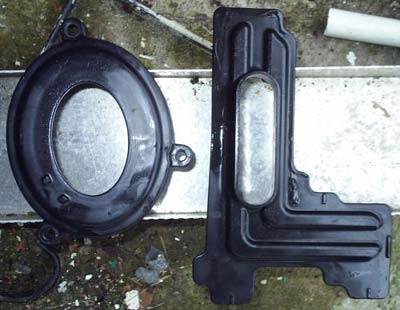 I've heard it said here and there that the entire air-box must be removed from the bike in order to remove the restrictor plate - this is utter nonsense! It can easily be removed "in situ". Here's how.....

First remove the right hand rear shock (to allow better access), the rear brake-fluid reservoir and master cylinder, fuse box and air temperature sensor and then undo all the screws holding the right side of the air-box in place [below left]. There are a couple of screws at the top rear of the cover in behind the frame which can be loosened with a pair of mole grips and a measure of patience. At the limit of their threads they will press up against the inner side of the frame [below right] - grip them with a pair of snipe nosed pliers and, saying the age old Scots mantra "Ya-bassurt!", twist them sideways and out towards the bulk of the air-box. 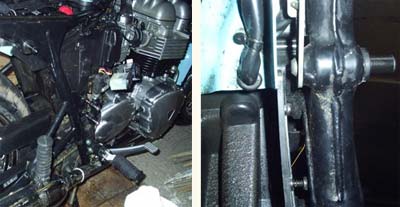 The side of the air-box will now be held in place only by the rubber seal and the sealing paste. Use a narrow screwdriver to pry the side loose and move the forward edge upwards and outwards. If the seal proves resistant to release, addition pressure can be applied from the inside (having removed the air-filter and snorkel mounting plate). The lower rear part of the cover is likely to jam against the frame at this point, so give it a good yank and it will come free - once more uttering the "Ya-bassurt" spell (I find this charm works in all sorts of situations where things require unjamming).

With the side removed, the restrictor plate will now slide out freely [below]. Also, it's probably worth giving the inside of the air-box a good clean at this point to get rid of any deposits of dust or emulsified "sump vomit" deposited via the engine breather pipe. 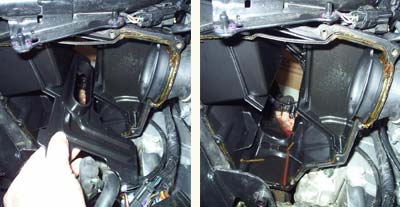 Simply replace the side cover (taking care to refit the rubber strip) and all the other gubbins you removed by reversing the above process, and the job's done.

If you intend to cut down the air-box itself at any later stage (to perform a KARK conversion, say) it's probably worth keeping hold of the restrictor plate to refit then as a top for your tool storage space.