Rather than spend a load of cash on some proprietary air-box removal or replacement kit, I did my own air-box removal and found it fairly simple. Also, you'd have to look at the side panels very closely indeed to tell it had been done. Here's how...

With the stock air-box removed or cut down, the carbs will need to be supported at the rear and fitted with suitable replacement filters. I chose to use K&N pod filters (part nos: RC2890 & RC2900) partly for their large surface area, though other equally suitable filters are available - as are much smaller versions for the engine breather pipe.

The carbs can be supported with a pair of braces fitted between the upper rear engine mount and the upper rear carb connecting rod [see below]. I made mine from bits of an old old stainless steel cafetiere, with holes drilled to 8mm & 9mm (the latter subsequently enlarged to fit round the carb connecting rod), 105mm centre to centre. I removed the upper rear carb connecting rod and shortened the thicker/outer part of it at both ends with a file (by the thickness of the two braces) it so that it would fit through the holes in the braces (which I drilled out to the same diameter as the locating holes in the carbs) and back into the holes in the carbs. If there ever comes a time when this mod has to be reversed, a pair of washers drilled to the same inside diameter will easily suffice. 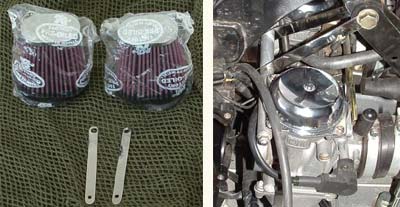 An obvious point perhaps but it's worth noting that, although it's not strictly necessary to remove the carbs when cutting down the air-box body in situ, it is vitally important to cover their inlets to prevent the ingress of any plastic shards and dust created during cutting. It goes without saying that you'll already have removed the seat and fuel tank. Given that you may need to shape the carb braces to the connecting rod anyway (depending on what you use), it might be best to disconnect the carbs from their forward mounts, wrap them in a plastic bag and lower them out of the way - in which case, you'll need to cover the head inlet manifolds too. I'd also recommend either covering or folding the crank-case breather pipe out of harm's way.

With the two air-box side covers removed [see Air-box Restrictor Plate Removal instructions], cutting down the air-box body is simply a matter of removing the upper front part of the body on either side. The amount you take away will vary according to the dimensions of your particular chosen filters. A "Dremel" type tool will do this without too much difficulty, as will a junior hacksaw blade snapped in half with a piece of insulation or duct tape around one end. Take care not to damage the finish on the frame running up from the swinging arm to the seat (too easily done at this stage). 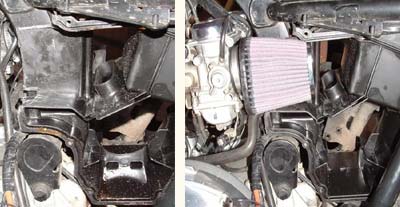 L: Cutting down the stock air-box.
R: Left side pod filter fitted (note that the lower mount for the stock filter has been removed to allow more storage space for tools, etc.

Having cut the air-box body to shape and smoothed the edges with a file or emery paper (or similar), the side covers can be cut to match. Where possible, try to retain the mounting points for the relays on the left side cover and the fuse box, air temperature sensor, rear brake fluid reservoir on the right cover and as many of the fixing points for the covers themselves. You may need to remove the forward of the two mounts for the starter relay (left mount) and the fuse box (right mount) respectively, but I have found that they each hold themselves in place adequately with only one mount. However, the plastic screw holding the fuse-box to the reservoir mounting bracket will need to be replaced with something more substantial - I used a stainless steel allan bolt. 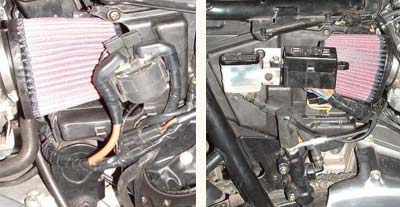 By the time I'd done all this, I'd already fitted the Wiseco 904cc big bore kit (Air Injection System removed and 18 tooth sprocket added). Until I was able to get the engine Dyno-tuned, I covered the pod filters with a pair of my son's old socks to maintain a half reasonable air/fuel ratio.

The carbs were later rejetted to 130 "Dyno" mains with 42 pilots. I also fitted Thruxton needles with six (yes six) shims to account for the extra response due to replacing the stock air-slide springs with a pair from a Kawasaki GPz900 (longer but less resistant). At some stage, I'll probably drill the vacuum holes in the slides to a slightly larger diameter to see if I can further increase throttle response. The cans are a pair of Togas with JC Whittney type baffles (only a bit shorter) which were "opened up" by having a 10mm drift battered down through the middle.

All that remained was to fit a filter for the engine breather pipe. I used a 2 inch (50mm) diameter chrome capped gauze filter with a ½ inch (13mm) male fitting for the breather tube. I secured it to the bottom of the choke slide bracket under the right carb with a short piece of stainless steel from the cafetiere. 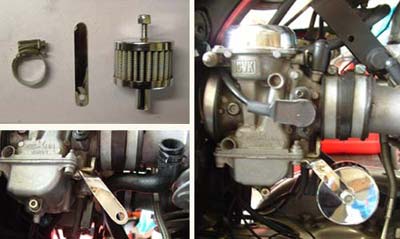 Mounting the engine breather filter on the bottom of the right carb.

The old stock filter compartment, now obsolete, is ideal for storing tools and the like as it's not too far from the bike's centre of gravity. With this in mind, it's a good idea to cut away as many of the old internal filter mounts as possible when the side covers are off to allow maximum room for storage.
An adjustable cover can easily be fabricated to prevent the movement or loss of any contents [see KARK Tool Box Cover instructions].