Where a pre-EFI bonnie has been bored out or re-jetted to suit more freely flowing filters and/or pipes, it can sometimes be helpful to allow the air-slides in the carburretors to move upwards more quickly to take advantage of the potential for increased throttle response. On the Keihin CVK 36 carbs, there are two principal ways of achieving this.

The simplest is to fit shorter and/or less resilient slide springs. If there is any doubt as to the suitability of allowing the slides to lift more readily, I strongly advise this as a primary course of action as it can easily be reversed. I used a pair of springs from a Kawasaki GPz900, though there may be others that are equally suitable.

However, It may be that your requirements will be better met by enlarging the vacuum hole in the carbs' air-slides (also referred to as vacuum pistons). The stock diameter of these holes is 2.5mm which, typically, is drilled out to 3mm. Technically, there is nothing difficult about this, though there are considerations to take into account before doing so.

It is important to understand that enlarging the vacuum holes is, for the most part, an irreversible alteration. I say "for the most part" because one could always buy replacement slides should the need arise - though that could be an expensive option. As a last resort, I suppose one could also fill the hole with the likes of JB Weld or an epoxy resin before re-drilling back to the original 2.5mm diameter - a far cheaper but altogether less tidy option and the added weight of any excess resin could cause further difficulties.

Undoubtedly, the wisest course of action is to make certain that this is an appropriate modification in the first place, by means of research in the light of your bike's existing characteristics and modifications. Whilst the merits of this decision are beyond the remit of this article, there are many discussions of the subject on the internet (some of which are linked to at the bottom of this page). Where this has been judged to be a valid option, here's how to go about it...

First of all, prepare a working space for cleaning and drilling, and assemble the required tools: phillips screw driver; drill (preferably a pillar-drill set to its lowest speed); 3mm HSS drill bit; a small jar containing a couple of inches of petrol; a thin flat-head screw driver, and; a clean piece of lint-free cloth.

Remove the seat and tank then clean all the parts of the frame/chassis above and around the carbs to prevent any dust and bits falling down into the carbs. Also, it's worth mentioning at this stage that it's a good policy never to put a dirty part back onto one's bike - always clean it and re-lubricte before re-fitting. Although it is perfectly reasonable to remove the components of both carbs together, I tend to work on one carb at a time - if only for ease of working.

Remove the carb cap, then the spring, then the slide/diaphragm/needle assembly. Carefully remove the needle from the air-slide such that any shims remain on the needle [below]. Put all the removed parts in a clean safe place, cover the open carb body with something clean and take the slide/diaphragm to the drill. It's fine to fold the diaphragm back on itself to allow the air-slide to be placed up-side-down on the surface ready for drilling - however, be very careful not to pinch or pierce it as this will render it useless and a replacement slide/diaphragm assembly will be required.

With the air-slide held firmly upon the work surface [below left], gently drill down into the existing vacuum hole a little way at first - to ensure the drill bit is tracking directly down through the centre of the existing hole [below right]. Gradually allow the bit to progress through, all the while keeping a good solid grip of the slide body against the work surface with your other hand, to prevent the bit catching and forcing the slide to rotate. If you're at all concerned about this possibility, the chances of it happening can be reduced by enlarging the hole in stages - first with an intermediate sized bit (say, 2.8mm) then follow that with the 3mm bit. If you have the bits available then certainly take this approach, especially if you are using a hand-held drill.

L: Drilling the vacuum hole on a pillar drill.
R: The partially drilled vacuum hole - note the ring of bright metal surrounding the existing hole, indicating the relative position of the new drilling.

With the 3mm hole drilled, you'll notice that the edge of the hole sits flush with the inside surface of the slide body. Wrap the piece of lint-free cloth around the end of the small flat-head screw driver and clean away any burrs and swarf from both sides of the enlarged hole. Then, with just the cloth, clean the rest of the slide/diaphragm. To make sure there is no remaining dirt or swarf on the assembly, wash it gently but thoroughly in the jar of petrol.

Keep a constant downward pressure on the cap until it is fully held in place by at least two diagonally opposing screws [below right] - if you don't, the edge of the diaphragm is likely to become unseated from the groove in the carb body and you'll have to seat it back into place again.

Repeat the above with the other carb, and you're done. It really is that simple! 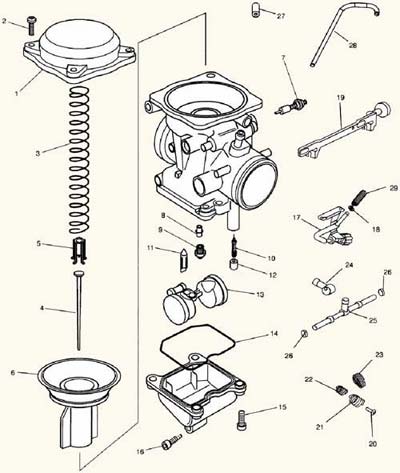 
That's all very well - but how does the thing actually work?

Alright, let's get theoretical for a moment. Bear with me - it's really not all that complicated. 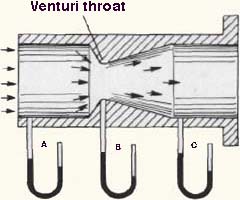 As the throttle mechanism opens the butterfly valve, more air is forced to pass through the carb's venturi by the pressure differential between the partial vacuum created by the engine's pistons sucking air in [C] and the ambient air pressure outside [A]. However, the suction of the pistons dropping alone is not what produces the relative vacuum necessary to lift the air-slide [B].

As the air passes through the venturi's narrowest point ("throat"), it has to accelerate to get the same volume of air through that narrower gap - very much like a tapered nozzle on the end of a hose. As the air accelerates, it has more kinetic energy and, therefore, less pressure - in the same way as air passing over the top of an aerofoil-section wing has to travel further and faster to reach the same point as that passing below it, thereby reducing its pressure and creating lift. Think of the air as being stretched so that it contains fewer molecules per unit volume - therefore it is less dense, creating less pressure. This is known as "Bernoulli's Principle".

A CV (constant vacuum) carburettor uses this principle to create a relative vacuum above the air-slide/diaphragm assembly to pull the slide upwards (thereby opening the venturi further) as well as to suck the fuel up through the needle jet from the float bowl below (regulated by the needle attached to the air-slide). It is the vacuum hole in the air-slide [B] which allows this effect to take place and it is partly the diameter of this hole that regulates it.

So, to an extent, if you increase the size of the hole (or fit a less resilient slide spring) this lifting effect will increase more readily in response to the butterfly valve opening - thereby allowing a greater volume of air/fuel mix to flow into the engine sooner. Hence the potential for increased throttle response.

As an aside, it's also worth noting that this same principle applied to the "short diameter" of the cylinder head's inlet port "throat" has the potential to increase the velocity of the air/fuel mix entering the combustion chamber. It's possible that this could distribute it more evenly throughout the chamber as well as partially re-atomising it more immediately prior to ignition. As suggested by "Motoman" [see link below], this might further increase both engine efficiency and power output. Something to ponder, perhaps.


More information on this subject (open in new window):