So what's it there for? It doesn't add anything to the Bonnie's performance or aesthetics and it certainly doesn't make changing the spark plugs any easier. Okay, here's how Triumph justify the existence of this particular piece of junk they've bolted onto an otherwise sensible motorcycle...

It rather strikes me that the best way to prevent unburnt hydrocarbons entering the atmosphere is to establish a correct air/fuel mix in the carburettors rather than risk sending burning exhaust gases back under your fuel tank and into your air-box, should either of the reed valves fail. Not a huge risk, granted (infinitesimally small actually), but sod it all the same - it is the conceptual epitome of "low risk" versus "high hazard". I, for one, would feel rather bad about polluting the atmosphere by suddenly becoming a sixty mph fireball hurtling down the road, strewing the verges with my charred personal proteins and hydrocarbons.

No - bin the sodding thing - no risk, no hazard!

Oh alright, maybe I over-egged the pudding a bit on that particular point but the fact remains that it is still more than a little extraneous to the workings of the Bonnie. Not for nothing is its removal one of the first and most common modifications to be performed. I ripped mine out straight away.

Sure, you want to get shot of yours too - but you don't have to spend a load of cash on an over-priced after-market "Air Injection Removal Kit". All you need are: a pair of sump bolts from a Suzuki SV650, Nissan Bluebird or similar (M12 X 1.25); an inlet manifold vacuum port cap (VAC 01), and; a half inch diameter (13mm) plug or bung for the hole in the top left of the stock air-box - I used a whittled down wine cork. All told, certainly no more than a fiver's worth, if that.


There are a few minor variations in the detail of its removal, all of which amount to pretty much the same thing. Briefly, here's how I did it...

Having removed the fuel tank, detach the black pipes [see below - 7] from the the two chromed tubes [10] next to the spark plugs - you'll need to release the small oetiker clips [9]. Then undo the chromed tubes from the head using a 13mm ring spanner - retaining the copper washers at their bases [16]. Discard the tubes and replace them with the sump bolts, remembering to fit the copper washers removed from the tubes.

Disconnect the ribbed plastic tube [5] from the left side inlet manifold vacuum port, located between the left side carb and the engine, and replace it with the port cap. As an alternative, it has been suggested that the balance of the carbs might be improved by keeping the tube in place on the left side vacuum port and connecting the reed valve end of the ribbed tube to the vacuum port on the right manifold, though I, personally, am yet to be convinced as to the effectiveness of this.

Pull the feed pipe [11] out of the top left of the air-box and replace that with the bung, using a little silicone sealant to effect an air-tight seal, should you deem it necessary.

The AI system is now, essentially, removed from the workings of the bike. All you need to do now is unbolt the reed valve assembly [1] from the frame above the cam cover, throw it at a passing cat/dog/politician (whatever) and that's it. 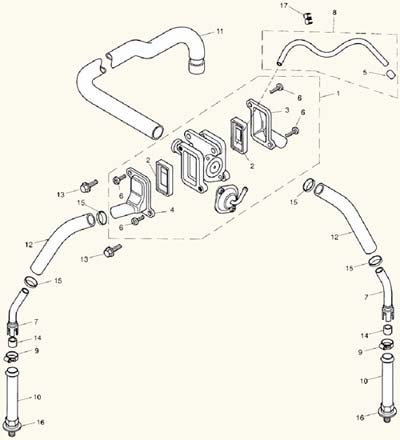 Some time after ripping my AI out, on returning to my Bonnie, I noticed a traffic warden writing out a ticket for a car parked to the rear of me. I quietly got onto my bike and opened the throttle slightly and then hit the starter. I'm delighted to say that, for the first time since I removed the AI, there was the most thunderous KA-BANG! and the warden (who was about a foot off the bike's tail) ended up having to retrieve his paperwork from the gutter. Needless to say, I didn't hang about for my own ticket. Be warned though, I think this might have been little more than a gratifying fluke and if you do happen to remove your AI then precious moments like this may become a thing of the past - until you start playing around with exhausts, that is.