I headed down to Wharfedale again for a couple of days and, once again, had a great run. I thought I'd try a variation of the run I described above so, on the way down, I headed southwest from Sedbergh to Dent and then northeast over the moors via the "Cold Road" to rejoin the main Sedbergh to Hawes road (A684) at Garsdale Head.

As expected, the roads around Dent were fairly narrow with a few overtaking opportunities along the way, though the views across the River Dee and Dentdale more than compensated. The village of Dent, like many in the dales, has cobbled streets - no problem in the dry, but worthy of respect in the rain. Exiting Dent past the village shop, the road snakes along the banks of the river to Lea Yeat where the "Cold Road" branches off north up the slopes of Dodderham Moss. It was a steep climb and a hot day so after a couple of miles I stopped briefly to allow the engine to cool a little and to take in the view.

At the high point at the Shaking Moss, I stopped again for a drink of water and to look west over the two valleys of Dentdale and Garsdale (with Snaizewold Fell and Aye Gill Pike between). As the road continued, the surface became very lumpy and pitied with an accumulation of gravel and chippings in the middle, so progress was slow. After a few miles, the road descended past Mossdale Common and down Garsdale Common to pass under the Settle to Carlisle Railway at Garsdale Head. This is where the Kirkby Stephen road (B6259) forks north at the Moorcock Inn. 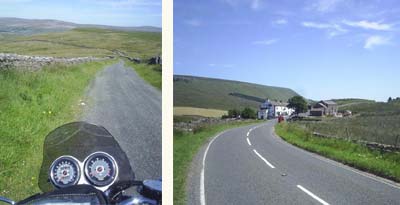 On the main road once more, I was able to up the pace somewhat. I started to notice my rear wheel apparently losing traction on many of the corners and was about to stop and see if something was amiss when I noticed that, every time a car passed the other way, a pair of parallel ruts were left in the road surface. When inspecting my own tyres, I could see a coating of melted tar over them and I was able to make a depression in the road with my thumb. Right enough, it was hot (even up on the "Cold Road" I was roasting in my leathers) - but I didn't expect the roads to be melting! I carried on to Hawes with this in mind.

At Hawes, I was able to buy some cheese before heading over the Fleet Moss road to Wharfedale. On the way down the other side, I stopped for another drink at Yockenthwaite and noticed that the River Wharfe had completely dried up - I've been paddling this river since the early 1980's and I never thought I'd ever see it like this. As I was taking a photo of the bridge from the river bed, I heard the unmistakable sound of a bonnie passing by. All I could see of the rider was his silver and black (goggled) lid - the bike itself was obscured by a dry-stone wall. Before I could get back to the road for a better look, he was gone. I wondered if it was anyone on the RatNet. Whatever, I got back on my bike and made for Kettlewell and a nice cup of tea. 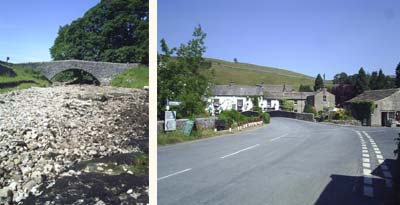 L: The dry bed of the River Wharfe at Yockenthwaite.
R: Kettlewell.

After a couple of well spent days, and a good time had by all - as ever, it was time to head back home. Over the Fleet Moss to Hawes and down Garsdale (cue a drink break and photo) to Sedbergh, where I decided to take the back road north to Howgill and up the east side of the Lune Valley to Tebay - avoiding the M6 motorway. This little detour was a revelation - I'd always traveled up this valley along the motorway and had never really considered that there might be anything of interest in the valley below - how wrong I was. The road itself is unclassified, very narrow and winds around the lower slopes of the southern Howgill Fells. For the first few miles it is constrained by high banks and hedges (a clue to its ancient origin as a drovers road) before crossing a cattle grid onto open moor. The motorway perches on the opposite side of the valley but never really intrudes. 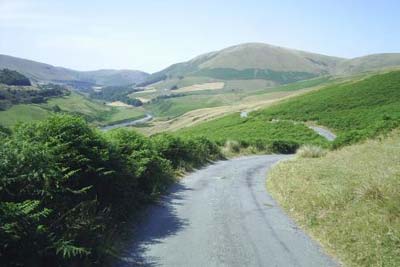 The Howgill to Tebay road up the Lune Valley.

For a short stretch, the road skirts the edge of "The Heart Of Westmorland" - a heart shaped plantation of oak said to have been established at the end of the First World War. So great had been the cost of the war to the local community that many villages had been bereft of nearly all their menfolk. The wives and mothers of those lost each planted an oak tree to their memory within a heart shaped boundary to represent their heartache. It now stands as a mature oak woodland mostly forgotten and almost completely unnoticed by those speeding past on the motorway over on the other side of the valley. The next time you're traveling south on the M6 between Tebay and Killington (junctions 36 and 35), have a look across to your left and you'll see it.

L: The bridge at Low Carlingill.
R: The old footbridge at Newby ford.

I stopped for a short break at the old bridge at Low Carlingill before heading under the railway and M6 to join the main Kendal to Kirkby Stephen road (A685) north to Tebay. From there I again headed to Orton and over Crosby Ravensworth Fell to Shap, hoping to buy some fresh hot pies and a bottle of raw milk from Bellus' - the local (and widely revered) butcher. Frustrated by a "closed" sign on the door, I decided to look up a couple of old friends who might have a kettle on the boil instead. A couple of miles north of shap, I took a right and headed for Newby (where the now-closed pub at Newby Hall was used in the filming of "Withnail and I") and then to Morland. A mile down a dusty track led me to my old house and my old neighbours: Alan the gamekeeper, and; Chris - a barrister turned chartered clerk and second-hand car salesman (it figures!).

As I arrived, Alan was just pulling his jeep up by his pheasant rearing pens and announced loudly that he was somewhat in need of liquid refreshment (paraphrased, naturally!). Every year he and his son rear, release and maintain at least 30,000 birds on scores of estates - the largest pheasant rearing set-up in the UK, I believe. When work was slow, I would often pass the time by helping him out and beating on the odd shoot. Having quenched his thirst, he turned his attention to the bonnie. "I used to have one of those", he said, "but not quite like that. What year is it?" I'd carry on, but I'm sure you know this conversation as well as I! After a while, I continued down the track to have a cup of tea with Chris and get the low-down on a building contract that might be in the offing. Presently, I noticed the afternoon was drawing in so I decided to make for home. A brief stop in Penrith for a ½ cwt bag of builders' sand followed by a razz up the B5305 and I was home, in perfect time to see my dinner being laid at my place on the dining room table as I rolled down the driveway - and plenty of sunshine left over for the evening.